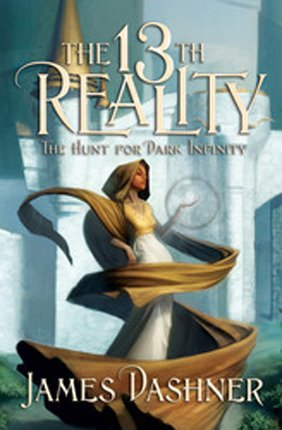 It’s been a quiet summer for Tick, Paul, and Sofia, but the latest message from Master George changes everything.

The Realities are in danger — and from something more terrible than Mistress Jane and the mutated Chi’karda of the Thirteenth Reality. People from all Realities are unexplainably going insane. Worse, some Realities are fragmenting, disintegrating into nothingness. Master George has learned that Mr. Chu from the Fourth Reality is working on a mysterious new weapon called Dark Infinity. But no one has any idea how to stop the weapon — or even if it can be stopped.

To make matters worse, Tick and his friends have been kidnapped, forced to wink from Reality to Reality, solving impossible riddles in order to survive the deadly traps surrounding them.

Mistress Jane and Tick find themselves in a race to reach the weapon first — but who will destroy it and who will become its master?

James Dashner
James Dashner was born and raised in a small town in Georgia, surrounded by a creepy forest that provided many ideas for stories later on in life. His love of books and writing made him dream of being an author someday, and he still can't believe how fortunate he is to have his wish come true.
James loves many things, but mostly his family, writing, reading, sports, movies, potato chips, autumn weather, and naps.
James can't wait to hear from his readers. If you ever want to ask him how to make a sandwich or how to tie a nifty double knot, just look in the wind-carved, snow-swept mountains of the west, where he is purported to live with a very beautiful woman and four adorable children. Or, you can just go to his website, www.The13thReality.com