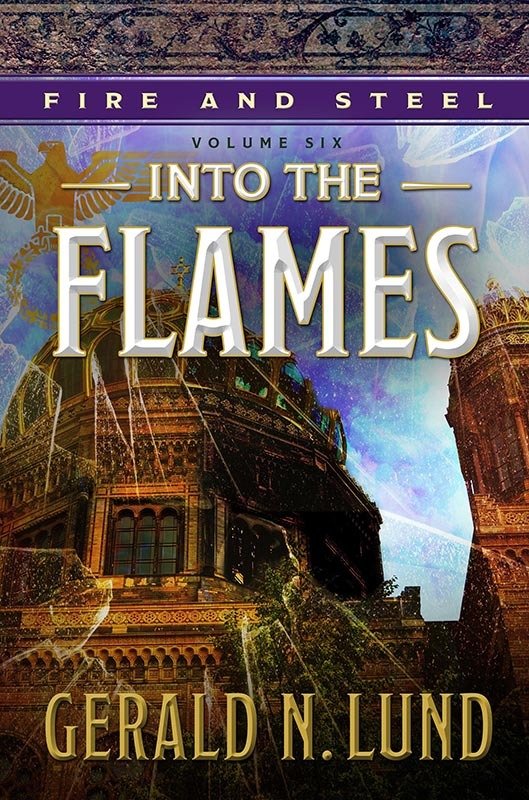 Adolf Hitler has completed his transformation of the German Republic into a total dictatorship. The Great Depression and relentless drought continue to ravage the United States. In all corners of the world, fear and uncertainty seem to rule the day. Can there be any hope on the horizon?

Into the Flames, the sixth and final installment of Gerald N. Lund's Fire and Steel series, brings new experiences, new challenges, new opportunities, and not a few tragedies into the lives of the Eckhardt and Westland families.

In America, Mitch and Edie continue their struggle to hang on to the ranch that has been their family's hone for nearly fifty years, while Benji's quest to find work turns catastrophic and sets him on a new path that will take him to exotic climes and an unexpected reunion.

in Germany, Hans makes a dangerous, life-changing decision to leave Nazi Party leadership and seek a new career. But when the ugly specter of anti-Semitism wields a direct and devastating impact on the Eckhardt family, they too are drawn into a maelstrom of events that threatens to destroy the very fabric of their lives.

As 1938 draws to a close and the dark clouds of war move in, the families must draw on their faith and courage to endure whatever life has in store for them.

Gerald N. Lund received his B.A. and M.S. degrees in sociology from Brigham Young University. He served for thirty-five years in the Church Educational System, and he served as a member of the Second Quorum of the Seventy from 2002 to 2008. He is a prolific and bestselling author of both fiction and nonfiction and is best known for his historical novels, including The Work and the Glory series, Fire of the Covenant, The Kingdom and the Crown series, and The Undaunted. He and his late wife, Lynn, are the parents of seven children.