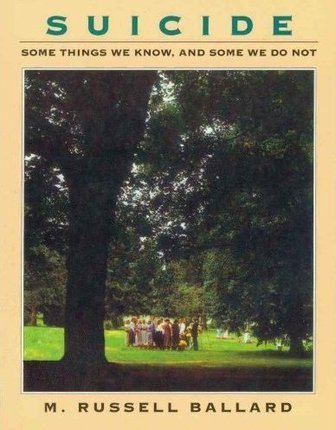 One of the most helpful discussions on the delicate subject of sucide was first published in the October 1987 Ensign in an article entitled "Suicide: Some Things We Know, and Some We Do Not." Now adapted into book form, this message gives help and provides hope to those who have felt the sting when a loved one or friend takes his or her own life. Elder Ballard's message is one of comfort and compassion. The reassurance that the Lord offers us indicates that even in such circumstances all is not lost. Says Elder Ballard, "As I think about the worry and agony of those whose loved one has taken his or her own life, I find deep comfort and faith in the Lord's promise and blessing to us who remain in mortality: 'Peace I leave with you, my peace I give unto you: not as the world giveth, give I unto you. Let not your heart be troubled, neither let it be afraid.'" (John 14:27). This book can be a great comfort to someone struggling with the tragic loss of someone dear.


M. Russell Ballard
Elder M. Russell Ballard was sustained as a member of the Quorum of the Twelve Apostles of The Church of Jesus Christ of Latter-day Saints in October 1985. Prior to that, he served in the first Quorum of the Seventy and in the presidency of that quorum. A successful businessman, he has engaged in various enterprises, including automotive, real estate, and investments. He has also served as a bishop twice and as president of the Canada Toronto Mission. Elder Ballard and his wife, Barbara Bowen Ballard, are the parents of seven children and grandparents of forty-three.