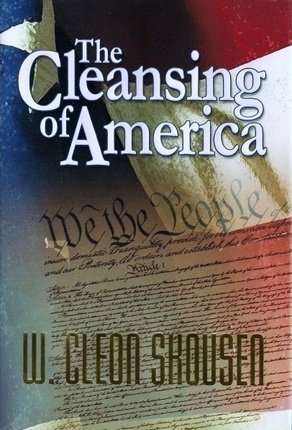 Dr. W. Cleon Skousen spent the majority of his life researching the gospel, the U.S. Constitution, the founding of America and writing numerous books and articles on the topic, and he is one of the most well-known, respected defenders of America and the gospel the world has ever known. At the time of his passing in 2006, his work was not yet finished. His book The Cleansing of America, written in 1994 and given into the care and keeping of his sons, is now being brought forth for the first time ever.

Included in these pages are the events and stages the Lord has predicted, through his servants, the winding-up scenes of this world. It helps the reader understand: the nature of prophecy, the known chronology of prophetic events, and the importance of staying close to the Lord and his prophets during the difficult and challenging years prior to the Second Coming. We are fast approaching those prophetic events. Some are upon us even now.

If we are prepared and obedient, we need not fear these events, but rather embrace them for the blessing they portend.

W. Cleon Skousen
W. Cleon Skousen is best remembered as a popular author, speaker and teacher who lectured in every state and province in North America, and in more than 60 countries world-wide. He was a student of history and a scholar of law, specializing in the principles of Freedom, the U.S. Constitution, economics, and ancient history and scriptures.

He was invited to write a new constitution for Canada and the proposed United States of Latin America, and he published a model constitution that could be adopted by nations everywhere. He served in the FBI for 16 years, four years as Chief of Police in Salt Lake City, and ten years as a university professor. He was a prolific writer and produced three national best sellers, The Naked Communist, The Naked Capitalist, and The Five Thousand Year Leap. Eight of his books were used as college texts, and several were translated and published in other countries.

Dr. Skousen was born in Canada, and returned to the U.S. with his family at age ten. He spent two years in Mexico, two years in England, graduated from San Bernardino College in California, and received his juris doctor degree from George Washington University Law School. He was admitted to practice law in the District of Columbia and before the District Court of Appeals and the U.S. Supreme Court.

His seminars on the Constitution have been taught to several million across the U.S., and among his students were dozens of U.S. Senators and Representatives, two Supreme Court justices, and several candidates for President. He believed knowledge and understanding were key to maintaining a free country, and spent his entire adult life opening up complex issues for deeper understanding by students and audiences all around the world.

Mr. Skousen and his wife, Jewel Pitcher of San Bernardino, California, are the parents of eight children, 50 grandchildren, and more than 120 great-grandchildren.