For Times of Trouble (Hardback) 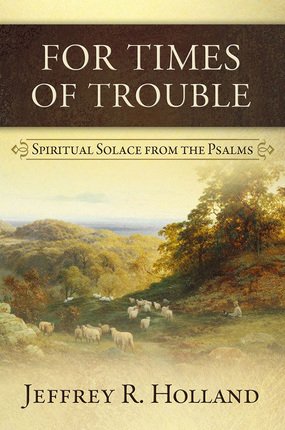 Our Father in Heaven wants us to be happy. And yet, we all have times of trouble. As Elder Jeffrey R. Holland writes, "One of the unfailing facts of mortal life is the recurring presence of trouble...When these difficult days (and nights!) come—and they will—it will help us to remember that 'it must needs be,' that in the grand councils of heaven before the world was, we agreed to such a time of challenge and refinement. We were taught then that facing, resolving, and enduring troublesome times was the price we would pay for progress. And we were committed to progress eternally."

A large percentage of the psalms that appear in the Bible were written for such times of trouble. From petitions for relief to acknowledgments of God's power, these psalms provide comfort, perspective, and spiritual solace when we are going through our own trials.

In this tender book, Elder Holland explores dozens of scriptural passages from the psalms, offering personal ideas and insights and sharing his testimony that "no matter what the trouble and trial of the day may be, we start and finish with the eternal truth that God is for us." Elder Holland's reflections on the psalms provide a powerful witness of that comforting truth.

JEFFREY R. HOLLAND was called as a member of the Quorum of the Twelve Apostles of The Church of Jesus Christ of Latter-day Saints in June 1994. A native of St. George, Utah, he received bachelor's and master's degrees from Brigham Young University and a master's degree and PhD in American Studies from Yale University. In 1974 he became dean of Religious Education at BYU and two years later was named Church Commissioner of Education. In 1980 he was appointed president of BYU, where he served until he was sustained as a member of the First Quorum of the Seventy in 1989. Elder Holland is the author of several books, including Broken Things to Mend and Christ and the New Covenant. He and his wife, Patricia, have three children and thirteen grandchildren.