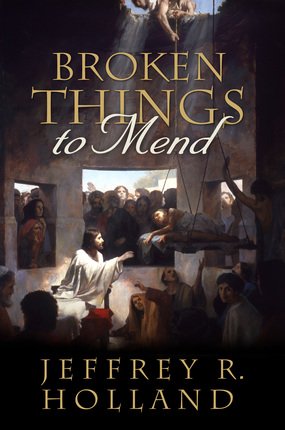 “Broken Things to Mend inspires us to maintain hope and to rivet our attention on the one who has the power to heal us.” — Desert Saints Magazine

Most of us feel broken at some time or another. We face personal trials and family struggles. We get discouraged and downhearted. Many are renduring conflicts fought in the lonely foxholes of the heart, feeling their lives may be broken beyond repair. In this extraordinary book, Elder Jeffrey R. Holland's characteristic good cheer and brilliant insights offer the surest and sweetest remedy of all. He invites all readers, not just the poor in spirit, to come unto Christ and receive “the strength that comes from experiencing firsthand the majesty of His touch.”

This collection of some of Elder Holland's most memorable recent talks inspires us to maintain hope and to rivet our attention on the one Person who has the power to heal us. Broken Things to Mend provides a stirring reminder that, if we come unto the Savior, He will make us whole.

JEFFREY R. HOLLAND was called as a member of the Quorum of the Twelve Apostles of The Church of Jesus Christ of Latter-day Saints in June 1994. A native of St. George, Utah, he received bachelor's and master's degrees from Brigham Young University and a master's degree and PhD in American Studies from Yale University. In 1974 he became dean of Religious Education at BYU and two years later was named Church Commissioner of Education. In 1980 he was appointed president of BYU, where he served until he was sustained as a member of the First Quorum of the Seventy in 1989. Elder Holland is the author of several books, including Broken Things to Mend and Christ and the New Covenant. He and his wife, Patricia, have three children and thirteen grandchildren.