A Summer With Great-Aunt Rose 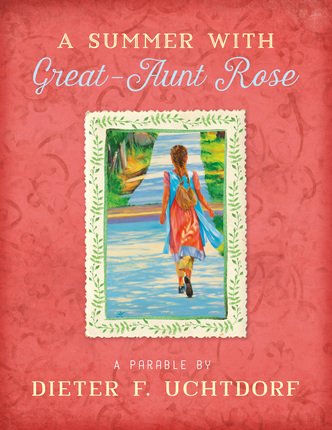 When eleven-year-old Eva is sent to stay with her great-aunt Rose for the summer, she can think of a thousand reasons why she does not want to be there. But as the summer progresses, she discovers that Great-Aunt Rose had learned some things about life that have made her the happiest person Eva has ever known.

The story of Eva's discovery is contained in President Dieter F. Uchtdorf's insightful parable originally delivered at the October 2015 general women's session of general conference. With charming full-color illustrations by fine artist Salvador Alvarez (the creator of Joy in the Journey, the pioneer-girl painting referred to by President Uchtdorf), this modern-day parable will teach and uplift women of all ages and life situations.

President Dieter F. Uchtdorf has served as the Second Counselor in the First Presidency of The Church of Jesus Christ of Latter-day Saints since February 3, 2008. He was sustained as a member of the Quorum of the Twelve Apostles in October 2004. He became a General Authority in April 1994 and served as a member of the Presidency of the Seventy from August 2002 until his call to the Twelve.

Prior to his calling as a General Authority, President Uchtdorf was the senior vice president of flight operations and chief pilot of Lufthansa German Airlines.

President Uchtdorf was born in 1940 in what is now the Czech Republic. He grew up in Zwickau, Germany, where his family joined the Church in 1947. He and his wife, Harriet Reich Uchtdorf, are the parents of two children and have six grandchildren.

Salvador Alvarez has been an artist his whole life. As a young man he studied under Sebastian Capella in oil painting and drawing, and Stanahous Sowinski in watercolor. Later he was awarded a full scholarship to the master's program at the New York Academy of Art. He is currently working on the "Joy in the Journey" pioneer collection.